Research on the large-scale ocean circulation and its impact on and response to climate change. 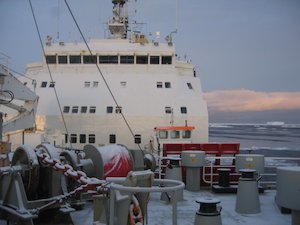 This includes the meridional overturning circulation, large-scale heat flux dynamics, origin and fate of mesoscale energy, deep convection, biophysical interactions, and subpolar ocean dynamics. Research methods are centred on ocean observations, with an aim to capitalise on synergies between datatypes. This means using two or more datatypes (satellite, in situ hydrography, moorings or autonomous platforms) to gain a better understanding of ocean dynamics than would be possible from a single data source.

Ocean drifters – floating instrument and transmitter packages – are powerful means of mapping surface currents, but their effectiveness and observational efficiency are limited by deployment constraints. We propose a novel, low cost drifter delivery technique, which obviates the need for large vessels: the concept is based on long range, lighter-than-air unmanned delivery platforms. We propose to conduct the preliminary development of the system from the perspective of a candidate application: the observation of freshwater mixing mechanisms in the Labrador Sea. 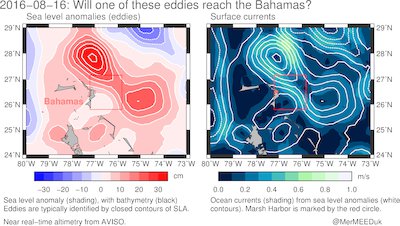 While eddies are present in all ocean basins, with currents inside the eddies sometimes exceeding 1 m/s, they disappear from satellite measurements preferentially at western boundaries. There are several possibilities for why eddies disappear at western boundaries: they may radiate energy away, contribute energy to large scale ocean circulation, or lose energy locally through turbulence and dissipation. Of these candidate terms, previous work has suggested that local dissipation is strong enough to explain a substantial part of the eddy disappearance. Our aim is to determine how and why eddies are losing energy at the western boundaries. These results and our measurements will then be made available to scientists involved in numerical simulations of the ocean. As a longer-term goal, the results of our research may help guide how eddies are represented in ocean models, which is one of the critical areas needing improvement in climate simulations. However, due to the fledgling nature of the science in this field, that eventual goal is still several steps away. 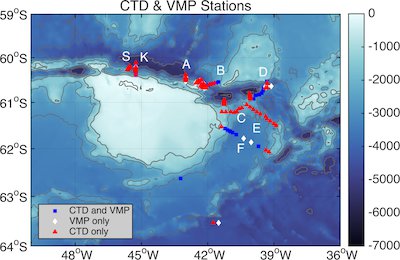 During the last three decades, the Antarctic Botttom Water (AABW) filling the bulk of the global ocean abyss has exhibited a striking warming and contraction in volume over much of the world ocean, particularly in the Atlantic basin. While the causes of these changes are unknown, available evidence suggests that, in the Atlantic Ocean, the warming and contraction of AABW may be caused by changes in winds over the northern Weddell Sea, where much AABW is produced. This hypothesis asserts that those winds regulate the volume and temperature of the AABW exported northward via the Orkney Passage (a major AABW exit route from the Weddell Sea) by altering the intensity of the turbulent mixing between AABW and overlying warmer waters in the passage.

Phytoplankton are aquatic, single-celled plants that lie at the heart of the global cycling of carbon between the atmosphere and the oceans. Like other plants, phytoplankton require sunlight and nutrients to grow and flourish. However, in the ocean sunlight is confined to the upper few tens of metres, while nutrient concentrations are low at the sea surface and greatest at depths of a kilometre or more. The growth of phytoplankton is thus fundamentally dependent on processes that transfer nutrients from depth up to the sunlit surface.

Over the mid latitudes the problem of acquiring nutrients is particularly stark. In this project, we address the problem of how deep nutrients are transported into the surface waters in mid-latitudes. We propose to test a new view: tides passing over the mid-Atlantic ridge generate enhanced turbulence and mixing, which in turn provides a nutrient supply to the upper thermocline waters. These nutrients are then transported horizontally along density surfaces over the western side of the basin, probably being swept along the Gulf Stream and eventually passing into the winter mixed surface layer. When this surface layer shallows and warms in spring, the nutrients are then available to the phytoplankton. The work plan involves two main components. We will carry out a field programme collecting measurements of the turbulence and nutrient concentrations over and adjacent to the mid-Atlantic ridge. The 2nd component of our work will use computer models of circulation in the Atlantic to explore the wider implications of the fieldwork observations, allowing us to decide whether or not mixing over the mid-Atlantic ridge really does provide enough nutrients to explain the phytoplankton production in the mid-latitude N Atlantic.

Investigating the stability of the West Antarctic Ice Sheet (iSTAR)

RAPID 26N observations of the MOC

We are investigating the feasibility of a disruptive technology for the rapid deployment of oceanographic and polar science instruments through an unmanned system comprising aerial and marine vehicles. This offers a step change in range and speed of deployment over current capabilities of comparable costs. A generic OPSARS system will consist of a long range Unmanned Air Vehicle (UAV), which delivers a light Au- tonomous Underwater Vehicle (AUV) to a pre-determined location, where the AUV is deployed (the UAV performs the deployment in-flight). This enables the rapid long-range deployment of the AUV to remote or inaccessible locations, including cracks in the Arctic ice. The UAV then returns to base, performs an aerial survey or holds on station above the deployment area, acting as a communications relay platform, while the AUV conducts an underwater survey or intervention.

The Environment of the Arctic: Climate, Ocean and Sea Ice (TEA-COSI)

From the TEACOSI website: The Arctic Ocean is predicted to be seasonally ice-free by the end of the century, and it will change radically as a consequence. Changes in the Arctic have the potential to affect remote climates, including the UK, by changing the nature of the thermohaline circulation, offering the risk of regional cooling against a background of global warming.

The key is to quantify (for the present) and understand (for the future) the Arctic ocean’s import of heat, export of freshwater, and storage of both. Direct exposure of the ocean surface to wind forcing will increase the efficiency of momentum transfer, so the ocean will spin up on seasonal, and possibly longer, timescales. The ocean’s turbulent mixing will strengthen, and dense water formation rates will change.

Our project will deliver a substantial enhancement in our understanding of key Arctic ocean and sea ice processes and their impact on the Arctic and wider climate system, in both the present and future. This will directly address the overall aim of the NERC Arctic programme: to improve capability to predict changes in the Arctic.

The atmosphere and oceans control the Earth’s climate. The ocean surface boundary layer (OSBL) is the upper 300m or so of the oceans and it is the part of the ocean that is directly affected by the atmosphere. So the OSBL acts to couple the atmosphere and deeper oceans together: it mediates the transfer of heat, momentum and important greenhouse gases such as carbon dioxide, and controls the supply of nutrients to the plankton that grow in the ocean surface boundary layer.

Our knowledge of the OSBL is very incomplete, and this means our quantitative models are not accurate. Nevertheless, it is a very exciting time to be doing research into the OSBL because we have new ideas about the fundamental processes that control the its evolution from timescales of days to years, and we also have exciting new tools to measure the ocean surface boundary layer.

OSMOSIS will bring together a team of meteorologists and oceanographers with backgrounds in theory, computer modelling and observations, with the aim of making a step change to our understanding and our predictive power of the OSBL. We shall do this with a combination of new theory and new measurements. The field expeditions will enable us to observe at close quarters how the OSBL evolves under different weather regimes. These data will provide stringent tests for our new theoretical ideas, and our simpler representations.

*From NERC Gateway to Research*

Diapycnal and Isopycnal Mixing Experiment in the Southern Ocean (DIMES)

From the ANDREX website: The ANDREX project seeks to assess the role of the Weddell gyre in driving the southern closure of the meridional overturning circulation, in ventilating the deep global ocean, and in sequestering carbon and nutrients in the global ocean abyss.

From the SOFINE website: The Southern Ocean FINEstructure (SOFINE) project studies the ‘frictional’ processes that slow down the strongest current on Earth (the Antarctic Circumpolar Current, ACC) and drive the extension of the ocean’s overturning circulation across the Southern Ocean. The experiment focuses on a major ACC meander (around the northern Kerguelen Plateau, southern Indian Ocean), which features as an area of intensified ‘friction’ and cross-ACC flow in most present theories and models of the Southern Ocean circulation. Specifically, in SOFINE we set out to explore two important oceanographic questions:

From the ASBO website: Coupled climate models predict a rate of warming in the Arctic some two to three times higher than the global average. One consequence of this warming is a change in the Arctic freshwater storage and transport, both within the Arctic, and through gateways to the world’s oceans.

Models and palaeoceanographic data show that increased freshwater input from the Arctic to the North Atlantic can ‘distress’ the thermohaline circulation. A decrease in the North Atlantic overturning may lead to a cooling of Northern Europe, so the understanding of these changes is one of the highest priorities for UK and NERC science. However our understanding of the mechanisms by which the freshwater input to the Arctic is transformed, stored, and exported is currently based on fragmentary observations, and poorly constrained models. By combining the data gathered during the International Polar Year (IPY) with historical and satellite data, our programme will use state-of-the- art numerical models to provide new quantitative estimates of the storage and transport of fresh water in the Arctic both for the present, recent past and next century.