Project summary: This project will assess the role of turbulent mixing in the ocean’s bottom boundary layer in driving the upwelling limb of the meridional overturning circulation. 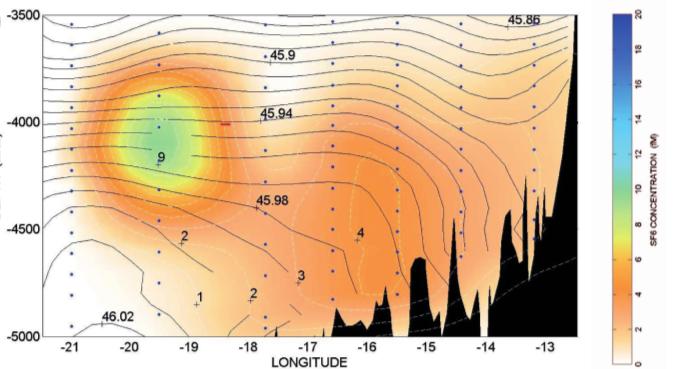 Since the seminal work of Walter Munk in the 1960s, oceanographers have believed that the upwelling of cold, abyssal waters that regulates the deep ocean’s ability to sequester heat and carbon for decades to millennia (thereby shaping Earth’s climate) is driven by centimetre-scale turbulent mixing associated with breaking waves in the ocean interior. Measurements of deep-ocean turbulence over the last two decades, however, starkly contest this scenario, and instead suggest that mixing by breaking waves drives downwelling of abyssal waters. Inspired by this conundrum, recent theoretical investigations have developed a tantalising alternative view of the role of mixing in sustaining deep-ocean upwelling. In this new view, upwelling is driven by highly localised turbulence within thin (typically tens of metres thick) layers near the seafloor, known collectively as the bottom boundary layer.

In this project, we set out to assess the validity of this new paradigm, and figure out how it works, by obtaining the first set of concurrent, systematic measurements of (1) large-scale mixing and upwelling, (2) their interior and bottom boundary layer contributions, and (3) the processes underpinning these contributions, in a representative deep-ocean basin (the Rockall Trough, in the Northeast Atlantic). To this end, we will conduct a year-long field programme involving three research cruises, in close collaboration with a group of U.S. project partners.

To measure (1), in the first cruise we will release a long-lived chemical tracer detectable at very low concentrations near the seafloor on the basin’s eastern flank, where deep waters flow into the basin from the south. We will monitor how the tracer mixes and upwells as it fills the basin by sampling it at 3 and 12 months after its release, during the two subsequent cruises. To measure (2) and (3), we will adopt a two-pronged approach. First, we will assess mixing and upwelling in the ocean interior and the transition into the bottom boundary layer by deploying turbulence-measuring profilers at hundreds of sites throughout the basin, in the first and third cruises. Second, we will obtain targeted measurements of mixing and upwelling across the bottom boundary layer in two ways: (i) by conducting two 6-month-long deployments of a cluster of novel, turbulence-measuring instruments moored at the seafloor, at two sites on the basin’s sloping boundary; and (ii) by performing a near-bottom release of a short-lived dye at each of the mooring deployment sites, and monitoring how the dye mixes and upwells over several days after its release.

We will integrate our measurements of (1)-(3) into the design of a realistic numerical model of the circulation in the Rockall Trough, and use the model to quantitatively test the new paradigm of ocean mixing. We expect this test to provide the first evidence of the dominance of bottom boundary layer turbulence in driving deep-ocean upwelling.

Fieldwork in Rockall Trough is anticipated to commence in 2021 and run through 2022.