Ocean observations are key to understanding the present climate, and improving future predictions. While satellite observations can estimate ocean surface circulation at broad scales, the smaller scale dispersal and transport in narrow regions (e.g., of freshwater in coastal areas around Greenland) are difficult to observe. These regions, however, can have a remarkably large effect on the global ocean circulation, particularly as Greenland and the Arctic appear to be melting at accelerating rates. Surface drifters are small, autonomous floats which travel with ocean currents and transmit their location to a base station via communications satellites. These drifters give an accurate, local measurement of ocean currents.

While drifters themselves are relatively inexpensive, deploying them to remote regions requires the use of global class research vessels. These ships are expensive to operate, and are prohibitively expensive for repeated deployment over longer periods (e.g., an annual cycle). This limits the effectiveness of the mapping, particularly as the currents in many regions of the oceans vary seasonally.

This project proposes an alternative: the concept of the balloon-borne drifter. Attaching each drifter to a gas balloon (similar to the commonly used latex weather balloons) means that it can be launched from land, fly to a target area (taking advantage of high-altitude winds), and then make a gentle splashdown at a target location. Using forecasts of high-altitude winds several days in advance, can give us a close approximation of where a simple balloon (and its drifter payload) will splash down. Moreover, adding an altitude control system to a balloon will enable an automated flight planning system to select the altitude to fly at, thus steering the balloon. The on-board altitude control system will also allow a controlled descent for gentle release of the payload (the drifter). The aim of FreshWATERS is to design the on-board altitude control system and the flight simulator/planner for the balloon.

To maximize the scientific effectiveness of the FreshWATERS system, we will simulate the release of a fleet of drifters over a target region in the ocean. By testing these deployments in an ocean simulation, we can better prepare for subsequent ‘real’ deployments. In this case, the Labrador Sea, between Greenland and Canada, is a site of special interest: it is both remote and difficult to access by global class ships, is a region where satellite measurements of ocean currents are insufficient to capture the scales at which the ocean varies, and where climate simulations have predicted that freshwater influx can have an impact on North Atlantic and, indeed, global ocean circulation. With this case study, we will be able to fine tune the FreshWATERS system, putting into place all the ingredients of the next stage: the development of a commercially viable and scientifically powerful new way of understanding the physics of the world ocean.

Click images below for photos from FreshWATERS field tests. 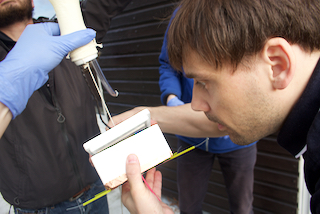