The ocean conveyor is a term used to describe how a parcel of water initially at the surface in high northern latitudes might travel at depth to the Southern Ocean, and then return in surface currents (see Figure 1). The conveyor belt idea made its Hollywood debut in the film ‘The Day after Tomorrow’ in which a palaeoclimatologist shows a similar diagram to politicians. Soon after, large drops in temperature are recorded by weather buoys off Greenland — a warning that the world is undergoing a massive climate shift due to a shut down of the conveyor belt. In the film, the shutdown of the circulation plunged the world into a new ice age, with glacial conditions spreading equatorward more quickly than cars could drive. While the details of the film are only loosely based on science, it raises a valid question: could the conveyor shut down and what would be the consequences to the Earth climate system if it did?

I’m involved in the project called RAPID/MOCHA, to observe and understand the variability of the meridional overturning circulation at 26N in the Atlantic. Most recently, we are attempting to unpick the relationships between the meridional overturning circulation and its various forcings, particularly winds (via Ekman transport, Sverdrup transport and local curl effects) and eddies, as well as investigating the relationship of the MOC at 26N to that at other latitudes.

The seasonal cycle at 26N and 41N is found to be alternately in-phase or out-of-phase, depending on whether you use a model or observations to investigate it [Mielke et al., 2013].

Using estimates of the deep western overturning transports at higher latitudes than 26N, it’s possible to estimate meridional coherence between them. On shorter timescales, these transports have a fixed phase relationship [Elipot et al., 2014].

The upper 1000 m of the ocean circulation at 26N is primarily associated with the subtropical gyre. According to simplified theory, the southward transport of the eastern half of the gyre should balance the wind stress curl forcing in steady state. A numerical model investigation suggests that the balance also holds in a time-varying sense, on interannual timescales (5-year filter) with a 2-year lag [Duchez et al., 2014].

In the winter of 2009-2010, the MOC collapsed (i.e., was briefly zero), recording negative overturning values by from our observations at 26N. This was due in part to a reversal in the sign of the Ekman transport, and an anomalously low Gulf Stream transport. At the same time, record low temperatures were felt in the UK and Europe.

From the RAPID observations at 26N, the downturn has been associated primarily with a strengthening of the southward flow of the upper mid-ocean transport (roughly, the top 1000m transport in the subtropical gyre) while the other components of overturning (Florida Current and Ekman transport) were relatively constant [McCarthy et al., 2012].

While the RAPID observations could link the dip in 2009/10 MOC to the upper mid-ocean transport, a numerical model was used to associate that change with atmospheric forcing. In particular, a numerical model forced by realistic atmospheric conditions was able to simulate not just the anomalous surface Ekman transports but also the changes in the upper mid-ocean transport [Roberts et al., 2013]. These findings suggest that the changes in 2009/10 may have been wind-driven.

Impact of eddies on the MOC

While the RAPID array is designed to estimate overturning, the structure of the array (as a zonal set of moorings along a single line of latitude) lends itself well to studying westward propagating eddies and Rossby waves. These eddies and Rossby waves may influence the transport variability of the MOC on shorter (sub-annual) timescales.

At the western boundary, however, the presence of eddies is associated with elevated turbulent dissipation. Using a finescale parameterization and a 75 kHz ADCP deployed as part of the RAPID array, dissipation is particularly strong during anticyclones (clockwise circulating eddies) relative to cyclones [Clement et al., 2016].

These eddies occasionally also drive the variability in the Florida Current transport, the Gulf Stream transport between Florida and the Bahamas. While the eddies are responsible for large, coherent fluctuations in the Gulf Stream, the process is non-stationary [Frajka-Williams et al., 2013].

or explore other research at 26N: MerMEED

Click images below for photos from the MerMEED fieldwork. 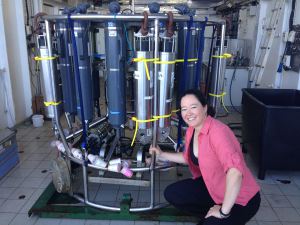