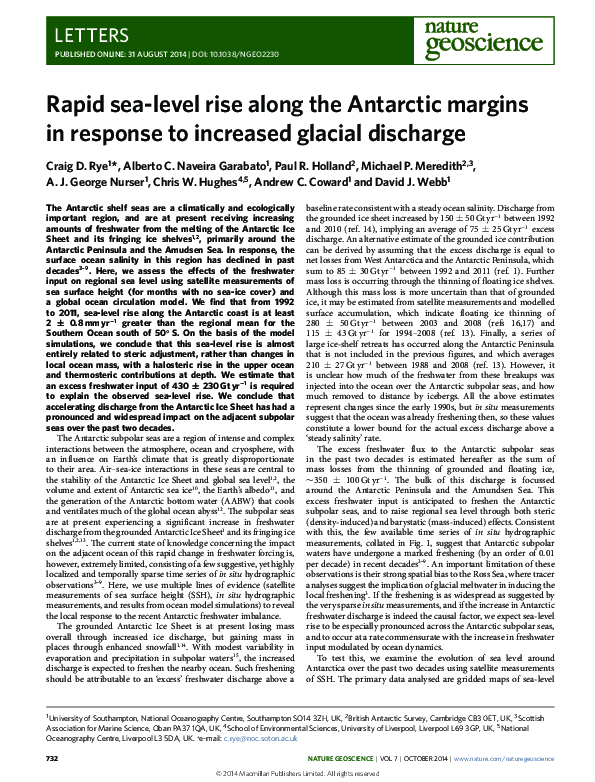 abstract: The Antarctic shelf seas are a climatically and ecologically important region, and are at present receiving increasing amounts of freshwater from the melting of the Antarctic Ice Sheet and its fringing ice shelves, primarily around the Antarctic Peninsula and the Amundsen Sea. In response, the surface ocean salinity in this region has declined in past decades. Here, we assess the effects of the freshwater input on regional sea level using satellite measurements of sea surface height (for months with no sea-ice cover) and a global ocean circulation model. We find that from 1992 to 2011, sea-level rise along the Antarctic coast is at least 2 \pm 0.8 mm yr^-1 greater than the regional mean for the Southern Ocean south of 50^\circS. On the basis of the model simulations, we conclude that this sea-level rise is almost entirely related to steric adjustment, rather than changes in local ocean mass, with a halosteric rise in the upper ocean and thermosteric contributions at depth. We estimate that an excess freshwater input of 430 \pm 230 Gt yr^-1 is required to explain the observed sea-level rise. We conclude that accelerating discharge from the Antarctic Ice Sheet has had a pronounced and widespread impact on the adjacent subpolar seas over the past two decades.