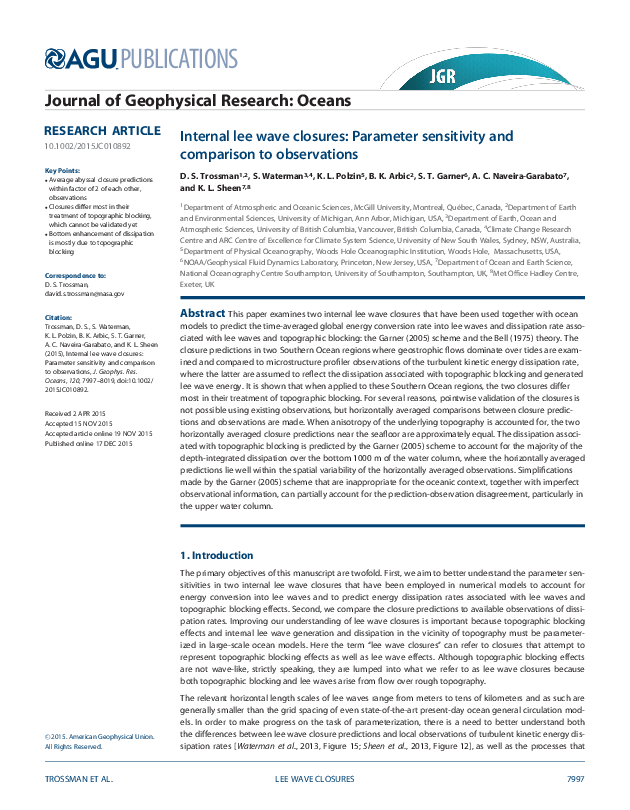 abstract: This paper examines two internal lee wave closures that have been used together with ocean models to predict the time-averaged global energy conversion rate into lee waves and dissipation rate associated with lee waves and topographic blocking: the Garner (2005) scheme and the Bell (1975) theory. The closure predictions in two Southern Ocean regions where geostrophic flows dominate over tides are examined and compared to microstructure profiler observations of the turbulent kinetic energy dissipation rate, where the latter are assumed to reflect the dissipation associated with topographic blocking and generated lee wave energy. It is shown that when applied to these Southern Ocean regions, the two closures differ most in their treatment of topographic blocking. For several reasons, point-wise validation of the closures is not possible using existing observations, but horizontally averaged comparisons between closure predictions and observations are made. When anisotropy of the underlying topography is accounted for, the two horizontally averaged closure predictions near the seafloor are approximately equal. The dissipation associated with topographic blocking is predicted by the Garner (2005) scheme to account for the majority of the depth-integrated dissipation over the bottom 1000 m of the water column, where the horizontally averaged predictions lie well within the spatial variability of the horizontally averaged observations. Simplifications made by the Garner (2005) scheme that are inappropriate for the oceanic context, together with imperfect observational information, can partially account for the prediction-observation disagreement, particularly in the upper water column.