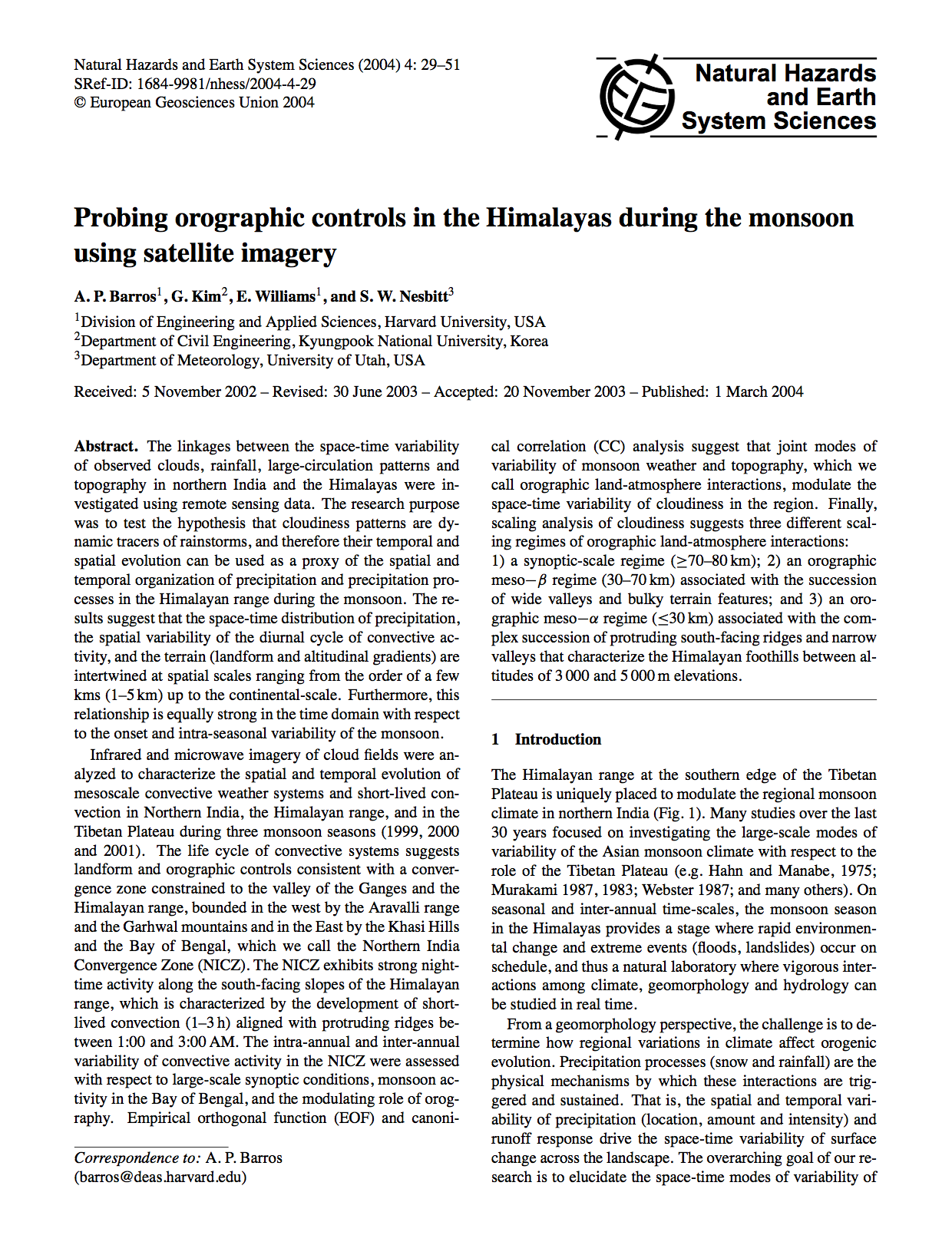 abstract: The linkages between the space-time variability of observed clouds, rainfall, large-circulation patterns and topography in northern India and the Himalayas were investigated using remote sensing data. The research purpose was to test the hypothesis that cloudiness patterns are dynamic tracers of rainstorms, and therefore their temporal and spatial evolution can be used as a proxy of the spatial and temporal organization of precipitation and precipitation processes in the Himalayan range during the monsoon. The results suggest that the space-time distribution of precipitation, the spatial variability of the diurnal cycle of convective activity, and the terrain (landform and altitudinal gradients) are intertwined at spatial scales ranging from the order of a few kms (1–5km) up to the continental-scale. Furthermore, this relationship is equally strong in the time domain with respect to the onset and intra-seasonal variability of the monsoon. Infrared and microwave imagery of cloud fields were analyzed to characterize the spatial and temporal evolution of mesoscale convective weather systems and short-lived convection in Northern India, the Himalayan range, and in the Tibetan Plateau during three monsoon seasons (1999, 2000 and 2001). The life cycle of convective systems suggests landform and orographic controls consistent with a convergence zone constrained to the valley of the Ganges and the Himalayan range, bounded in the west by the Aravalli range and the Garhwal mountains and in the East by the Khasi Hills and the Bay of Bengal, which we call the Northern India Convergence Zone (NICZ). The NICZ exhibits strong night-time activity along the south-facing slopes of the Himalayan range, which is characterized by the development of short-lived convection (1–3h) aligned with protruding ridges between 1:00 and 3:00 AM. The intra-annual and inter-annual variability of convective activity in the NICZ were assessed with respect to large-scale synoptic conditions, monsoon activity in the Bay of Bengal, and the modulating role of orography. Empirical orthogonal function (EOF) and canonical correlation (CC) analysis suggest that joint modes of variability of monsoon weather and topography, which we call orographic land-atmosphere interactions, modulate the space-time variability of cloudiness in the region. Finally, scaling analysis of cloudiness suggests three different scaling regimes of orographic land-atmosphere interactions: 1) a synoptic-scale regime (≥70-80km); 2) an orographic meso–β regime (30–70km) associated with the succession of wide valleys and bulky terrain features; and 3) an orographic meso–α regime (≤30km) associated with the complex succession of protruding south-facing ridges and narrow valleys that characterize the Himalayan foothills between altitudes of 3000 and 5000m elevations.