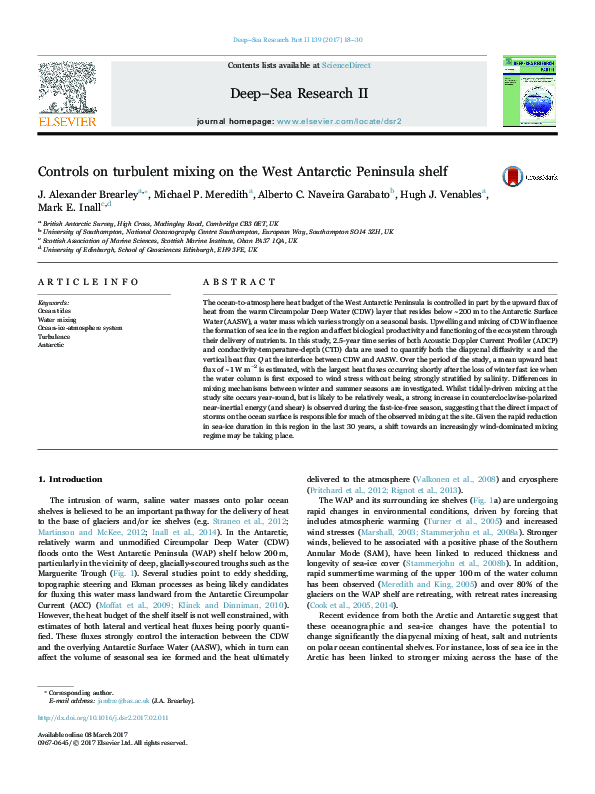 abstract: The ocean-to-atmosphere heat budget of the West Antarctic Peninsula is controlled in part by the upward flux of heat from the warm Circumpolar Deep Water (CDW) layer that resides below \textasciitilde200 m to the Antarctic Surface Water (AASW), a water mass which varies strongly on a seasonal basis. Upwelling and mixing of CDW influence the formation of sea ice in the region and affect biological productivity and functioning of the ecosystem through their delivery of nutrients. In this study, 2.5-year time series of both Acoustic Doppler Current Profiler (ADCP) and conductivity-temperature-depth (CTD) data are used to quantify both the diapycnal diffusivity κand the vertical heat flux Q at the interface between CDW and AASW. Over the period of the study, a mean upward heat flux of \textasciitilde1 W m^-2 is estimated, with the largest heat fluxes occurring shortly after the loss of winter fast ice when the water column is first exposed to wind stress without being strongly stratified by salinity. Differences in mixing mechanisms between winter and summer seasons are investigated. Whilst tidally-driven mixing at the study site occurs year-round, but is likely to be relatively weak, a strong increase in counterclockwise-polarized near-inertial energy (and shear) is observed during the fast-ice-free season, suggesting that the direct impact of storms on the ocean surface is responsible for much of the observed mixing at the site. Given the rapid reduction in sea-ice duration in this region in the last 30 years, a shift towards an increasingly wind-dominated mixing regime may be taking place.