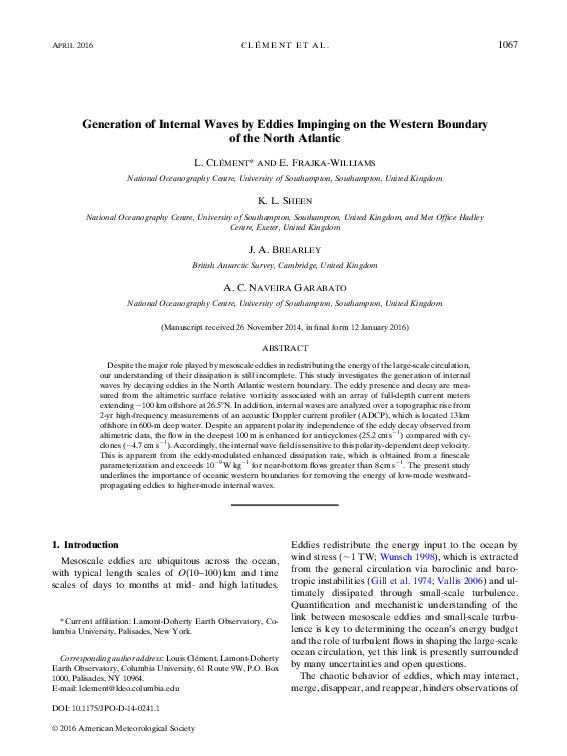 abstract: Despite the major role played by mesoscale eddies in redistributing the energy of the large-scale circulation, our understanding of their dissipation is still incomplete. This study investigates the generation of internal waves by decaying eddies in the North Atlantic western boundary. The eddy presence and decay are measured from the altimetric surface relative vorticity associated with an array of full-depth current meters extending  100 km offshore at 26.5°N. In addition, internal waves are analyzed over a topographic rise from 2-yr high-frequency measurements of an acoustic Doppler current profiler (ADCP), which is located 13 km offshore in 600-m deep water. Despite an apparent polarity independence of the eddy decay observed from altimetric data, the flow in the deepest 100 m is enhanced for anticyclones (25.2 cm/s) compared with cyclones (−4.7 cm/s). Accordingly, the internal wave field is sensitive to this polarity-dependent deep velocity. This is apparent from the eddy-modulated enhanced dissipation rate, which is obtained from a finescale parameterization and exceeds 10e-9 W/kg for near-bottom flows greater than 8 cm/s. The present study underlines the importance of oceanic western boundaries for removing the energy of low-mode westward-propagating eddies to higher-mode internal waves.