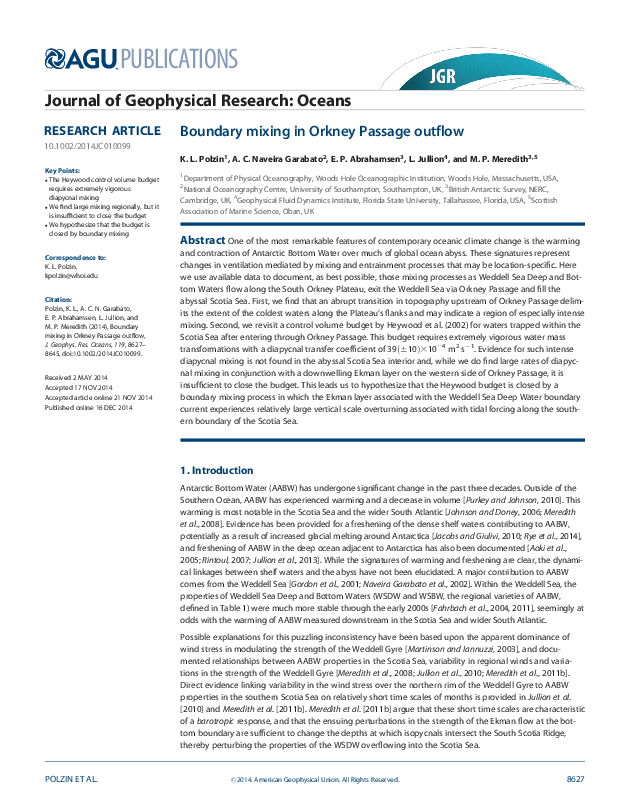 abstract: One of the most remarkable features of contemporary oceanic climate change is the warming and contraction of Antarctic Bottom Water over much of the global ocean abyss. These signatures represent changes in ventilation mediated by mixing and entrainment processes that may be location-specific. Here we use available data to document, as best possible, those mixing processes as Weddell Sea Deep and Bottom Waters flow along the South Orkney Plateau, exit the Weddell Sea via Orkney Passage and fill the abyssal Scotia Sea. First, we find that an abrupt transition in topography upstream of Orkney Passage delimits the extent of the coldest waters along the Plateau’s flanks and may indicate a region of especially intense mixing. Second, we revisit a control volume budget by Heywood et al. (2002) for waters trapped within the Scotia Sea after entering through Orkney Passage. This budget requires extremely vigorous water mass transformations with a diapycnal transfer coefficient of 39 (\pm 10) \times 10^-4 m^2 s^-1. Evidence for such intense diapycnal mixing is not found in the abyssal Scotia Sea interior and, while we do find large rates of diapycnal mixing in conjunction with a downwelling Ekman layer on the western side of Orkney Passage, it is insufficient to close the budget. This leads us to hypothesize that the Heywood budget is closed by a boundary mixing process in which the Ekman layer associated with the Weddell Sea Deep Water boundary current experiences relatively large vertical scale overturning associated with tidal forcing along the southern boundary of the Scotia Sea.